Few aircraft hold such a place of love and respect in a nation’s aviation history that they can be called “iconic”. For members of the British Commonwealth, the iconic fighter aircraft of World War Two was the Supermarine Spitfire. The Spitfire was physically beautiful, with graceful lines and elliptical wings, while at the same time it was deadly efficient in air combat. Many of the pilots who flew it, including Wing Commander Stocky Edwards of Comox, BC, say it was a dream machine to fly – it responded beautifully to light control input and could turn circles around enemy aircraft.

Spitfire Mark IX Serial Number TE 294 was manufactured in 1945 in Castle Bromwich, UK. Delivered to the RAF in June that year, she was too late to see wartime combat. At the conclusion of WWII, the RAF moved quickly into the Jet Age and many now-surplus Spitfires were sold off within the Commonwealth. In particular, TE294 was sold to South Africa in 1947, along with a couple of dozen other aircraft. She was flown on various training missions over the years, unfortunately, following a “wheels-up landing” in 1952 she was written off and subsequently sold, along with other Spitfires, to a scrap metal dealer near Pretoria, where she languished for decades.

In the early 80’s, a Mr. Mark DeVries who worked at a museum nearby, recovered parts of TE294, along with several truckloads of other aircraft parts, from the scrap metal dealer, and began a project to reconstruct a flying Spitfire. During the mid-90s, he came to Canada, settling in Langley, BC, and continued his ambitious project.  Unfortunately, due to his deteriorating health, he was unable to continue the project and in the spring of 2000, Mr. DeVries sold a 50% ownership in the pieces and parts to the Comox Air Force Museum for $95,000. In a separate purchase the CAFM paid $5,000 for full ownership of the TE294 stamped firewall. As a matter of note, if one wishes to re- build an authentic Spitfire, the project must incorporate parts from an original aircraft if it is to have “provenance” or legitimacy.  The firewall structure and other pieces of TE 294 were, accordingly, critical to the re-build. Mr. DeVries passed away in 2006 and full ownership of the pieces then passed to the CAFM. Purchases elsewhere included such diverse items as shop tools and supplies, wing spars, a propeller hub and blades as well as specialised jigs to build the fuselage. 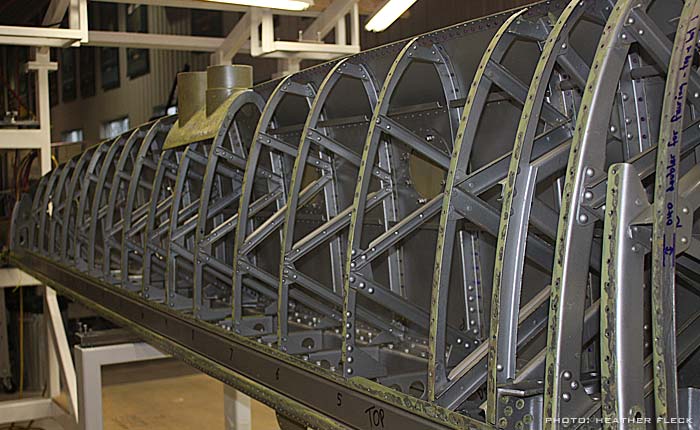 The Museum bought TE294 by using a portion of a $250,000 Heritage Grant, which were Non Public Funds (NPF). The grant money came from the Millennium Fund which was established to encourage DND employees and CF Members to mark the millennium in meaningful and creative ways.  The objective of the celebrations were to both encourage and promote Canadians’ knowledge of the CF/DND and to celebrate Canada’s military history and achievements so that they were inspired to take pride in the military history of their country. Millennium Project Funding was provided to 19 Wing to allow the purchase of the Spitfire components and to ensure the restoration of the fuselage during the millennium year. The objectives required for receipt of this grant were met.

Money and property within the Department of National Defence are either Public Funds (paid for by taxpayers) or Non-Public Funds, (owned by the members). Since she was clearly not public property, Spitfire TE294 became a piece of Non Public Property.  As such, any and all major decisions about her could only be made by the Chief of Defence Staff (CDS), even though no public or non-public funds were designated to, or ever used, in her restoration. This fact became very germane when it came time to sell her to a private company.

An enthusiastic committee, led by Maj. Joel Clarkston, supported by LCol Mike Spooner WAdmO, and LCol Grant Smith CO 442 Sqn and fully endorsed by the Wing Commander,  Col. Bill Newman, determined that the aim of this project was to return this celebrated World War II aircraft to flying condition. It was to be in the exact colours depicting 442 Squadron’s famous Spitfire with the identifiers “Y2K”.  During World War Two, 442 Squadron (RCAF) was a fighter squadron deployed to North West Europe after D-Day. Their Squadron identifier was “Y2”, and their eleventh aircraft would be “Y2K”. Fortunately, Y2K was also the name given to the year 2000 and this project made an excellent Millennium Project, but the “Y2K” name did not originate because of this coincidence.

The stated goal of the project was “Y2K Will Fly Again” and this lofty goal became the mantra for all restoration and fund-raising activities.  Certainly, building a replica for display would have been cheaper and quicker, but it was a far cry from an airworthy Spitfire and would belie the original vision of the projects founders.  Optimistic plans estimated that restoration work could take from three to five years to complete, as long as adequate funding could be obtained, and the total cost of the restoration was estimated in 2001 to be $940,000.  It ended up costing three times that amount and taking three times as long. A dedicated Heritage Hangar was built, using grant money for the Spitfire restoration, near the Heritage Air Park. This workshop was informally named the Tet Walston Heritage Hangar out of respect for Tet Walston, a WW2 Spitfire recce pilot and a big supporter of the project. Later, this building was expanded as part of a deployed exercise by USAF Air National Guard construction engineers.

As noted, neither DND, nor the Museum nor the Museum’s Association funded this project. Rather; it was self-supporting and existed on donations, grants and small fundraising projects. These monies went principally to pay the salary of the sole Aircraft Mechanical Engineer(AME), who did the actual reconstruction work. In order to obtain a valid air worthiness certificate from Transport Canada, all work on an aircraft that is intended to fly must be done or signed off by a licenced and qualified AME.  From 2002 until 2009, this AME was Mr. Bonn Svensson and most of the excellent fuselage and empennage work is the result of his skilled hands. All other work was done by a small team of highly dedicated and motivated volunteers under the supervision of the AME.

This aircraft is a complex system of electrical, hydraulic, pneumatic and mechanical parts that were designed and built in the urgency of an impending conflict to satisfy a real need.  Most of these complex parts are long out of manufacture, thus they needed to be rebuilt, remade or purchased. Mechanical Items such flight control rods and fuselage pieces and flight controls could be manufactured from drawings and old examples, but items like fuel pumps, and cockpit gauges  and hydraulic parts cannot, so they needed to be obtained on the open market. This was found to be very expensive as specific dealers, mainly in the UK, had long ago corned this market and knew what they had was valuable. Bargaining became an art for the project: “I’ll give you two of these for one of those” deals, and the internet became a great source of parts information.

The Y2K Project was carried on the shoulders of devoted and tireless volunteers. They included many CAFM volunteers, but added key supporters such as Pat Murphy, Dave Macleod, Tom Quibell and Captains Harold Mulder and Mike Forbes. They invented and conducted a variety fund raising activities: this included posters, ball caps and t-shirts emblazoned with “Y2K Will Fly Again”. They organised Spitfire pilot autograph sessions, where such Spitfire heroes as Stocky Edwards, Duke Warren, Jim O’Toole, Hart Finley, Jim Rankin, Jan Pomietlarz, Art Sager and Kit Carson, would gather in the Hangar to sign posters and be photographed. The Committee commissioned Gordon Pynn to paint a limited edition print of the Y2K Spitfire shooting down a FW-190: “Touche!” Subsequently 500 serialised copies were made and signed by 12 wartime Spitfire pilots. The Committee also commissioned another painting of Y2K in Comox was by Brian Scott, a local but very famous painter, whose creation followed his inimitable style. These prints were then sold to generate much needed funds. The volunteers also organised a BBQ at 442 Sqn, where folks could gather, eat, learn about the Spitfire Project and contribute to it through donations and/or buying Y2K branded items. Finally, Capt Mike Forbes worked hundreds of weekends, opening the hangar and giving guided tours of the project. It is very worth noting that during the period 1999 – 2008 the project received donations totalling $125,645.00.

This site uses Akismet to reduce spam. Learn how your comment data is processed.